Palestine - Conversations with Our Children

Palestine - Conversations with Our Children

Watching the attacks on Palestine for another year this Ramadan has been heartbreaking to say the least. The atrocities seem unending, and the world’s leaders are silent. There has been more than one occasion where I have felt helpless while asking myself ‘What can I do?’ Educate myself, spread awareness, boycott…These were my first instincts, but the one thing that weighed heavy on my heart was the need to educate my children. The more I reflected on this, the more I understood the need for all Muslim parents to educate our children about Palestine. WHY SHOULD WE EDUCATE OUR CHILDREN ABOUT PALESTINE?
Palestine is home to one of our holiest sites in Islam, Masjid Al Aqsa. To say Palestine is significant in the history of Islam would be an understatement. Imagine our children not being able to recognize the Kabbah! Yet many children cannot recognize Masjid Al Aqsa.  This is our history, and the people of Palestine are fighting for their human rights and to protect this holy site. Isa (AS) was born in Palestine, many of our prophets have lived there and many prophets and companions are buried there. The Prophet (SAW) reported that the angels spread their wings over the land.

SOME HISTORY ABOUT MASJID AL AQSA.

Masjid Al Aqsa houses Al Qibly Masjid, Dome of the Rock, ancient wells and historical ruins. The original name of Masjid Al Aqsa is Baitul Maqdis which is Arabic for “Holy House”. While Baitul Maqdis is often used to refer to the mosque specifically, it's name is a reference to all of the Holy grounds where the mosque and Dome of the Rock rest. The word Aqsa means “far” and Masjid Al Aqsa is often translated as “The Farthest Mosque” due to its great distance from Mecca. 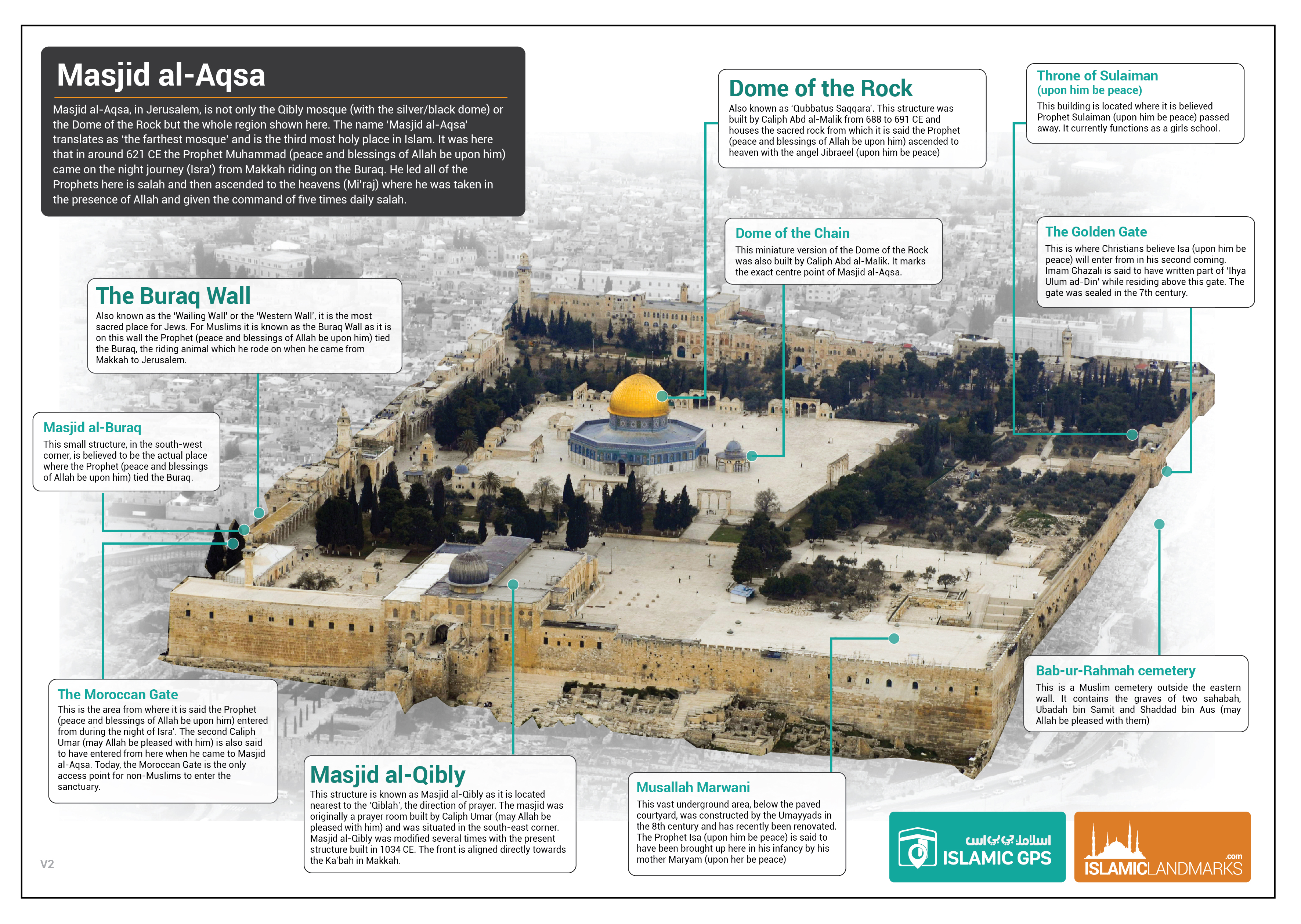 WHAT IS THE IMPORTANCE OF MASJID AL AQSA?

“Exalted is He who took His Servant [Prophet Muḥammad (ﷺ)] by night from al-Masjid al-Ḥarām to al-Masjid al-Aqṣā, whose surroundings We have blessed, to show him of Our signs. Indeed, He is the Hearing, the Seeing.” 17:01

When Sulaiman bin Dawud finished building Baitil-Maqdis, he asked Allah for three things: judgment that was in harmony with His judgment, a dominion that no one after him would have, and that no one should come to this mosque, intending only to pray there, but he would emerge free of sin as the day his mother bore him.” The Prophet (ﷺ) said: “Two prayers were granted, and I hope that the third was also granted.” Ibn Majah

“Then I left and it was not more than a little while when a lot of people gathered, and someone called for the prayer and the prayer was established.” He (the Prophet ) continued, “So we stood in lines waiting for someone to come and lead us, then Jibra’il took my hand and asked me to lead the prayer, and I did. After the end of the prayer Jibra’il asked me, ‘O Muhammad, do you know who prayed behind you?’ I said, ‘No’. He said, ‘Every Prophet sent by Allah swt prayed behind you.’ Then Jibra’il took my hand and we ascended to heaven.” (Narrated. Ibn Kathir)

He (The Dajjal) will not come to four mosques: the Ka’bah, the Mosque of the Prophet, al-Masjid al-Aqsa and the Mosque of al-Toor (Sinai).” This hadeeth was classed as saheeh by Shu’ayb al-Arna’oot in Tahqeeq al-Musnad.

SO HOW DO WE EXPLAIN TO OUR CHILDREN ABOUT WHAT IS GOING ON IN PALESTINE?

Depending on the age of your children will depend on what details you share at this point. It is important to acknowledge that every child and every family is different. That being said, there is some information that we should be teaching our children at all ages.

- The importance of Masjid Al Aqsa in Islam. (See above) - Where Palestine is on a map (If the map you have doesn’t acknowledge Palestine, write it on there yourself). - Most importantly teach our children that the people of Palestine are suffering greatly. In Islam we are taught:

“The believers are just like one body. When one of the limbs suffers, the whole body responds to it with wakefulness and fever”.  [Al-Bukhari and Muslim].

We must teach our children to make dua for those in Palestine and all of those who are suffering worldwide.

WHAT ABOUT THE TOPIC OF WAR?

So what details do we share about the atrocities taking place against the Palestinian people? How do we talk to our children about these things in an age appropriate way? Again, every family will be different. The age of your child will be a significant factor in how much information is appropriate to share. Certainly the use of crafts, activities, stories and books are often effective ways of sharing and teaching our children in a way that is engaging and positive. We have also found that a resource that can be very helpful for families are the many children’s books that have been published about war and displacement. Additionally we are starting to see more and more lovely children’s books about Palestine. Included below is a list of books you may want to consider when discussing the topics of Palestine, war and displacement in general. Sitti’s Olive Trees - by Ndaa Hassan
Sitti’s Olive Trees is a story of the olive harvesting season in Palestine. Sitti shares memories of her ancestors planting and caring for their precious olive trees with Reema, her granddaughter. Reema is captivated by the beautiful story and learns the value of each drop of olive oil. This warm tale is a celebration of culture, family, and storytelling with an aim to preserve values and traditions. Maha's grandma is moving from Palestine to Canada, and Maha can't wait! Teta travels from far away with a box full of secret recipes and special memories.

Maha wants to keep them all for herself, but Teta's kindness teaches her the value of sharing, and the joy of connecting with loved ones. Ages 4+ Mosques of the World Activity Book by Aysenur Gunes

Travel around the world's mosques with this fun sticker activity book. It features dot-to-dot drawings, coloring fun, puzzles, to solve and over sixty stickers to stick. This book introduces children to the different styles of mosques from Saudi Arabia, Palestine, Malaysia, Mali, Morocco, China, and more. Baba What Does My Name Mean? – Rifk Ebeid
When Saamidah, a young Palestinian refugee, is asked by her friends what her name means, she isn't quite sure what to say. She turns to her baba for some answers - but what she gets is an adventure beyond her wildest dreams. Join Saamidah on a lyrical journey, with dazzling illustrations, that brings to life her beloved homeland and celebrates the richness of her cultural heritage and the determination to return. Sittis Secrets  by Naomi Shihab Nye
Mona travels from America to Palestine to visit her grandma, her Sitti.  Without the ease of speaking the same language, Sitti and Mona learn to communicate and build a tight bond cut too short by a vacation coming to an end.  When Mona returns she sees the news and writes a letter to the President, telling her Sitti’s secrets, telling him they would be great friends, and telling him they only want peace. Age 6+ The Little War Cat- Hiba Noor Khan
The Little War Cat follows the story of a little grey cat who is caught up in the BANGS and CRASHES of the humans in boots, who have changed the city of Aleppo she knew so well into one that's harder to recognize. She is roaming the streets looking for food and shelter when an unlikely friend appears. He shows her that kindness is still there when you look for it, and soon the little grey cat knows exactly what to do to made a difference herself. Ages 5+ My Name is Not Refugee - Kate Milner

A young boy discusses the journey he is about to make with his mother. They will leave their town, she explains, and it will be sad but also a little bit exciting. They will have to say goodbye to friends and loved ones, and that will be difficult. They will have to walk and walk and walk, and although they will see many new and interesting things, it will be difficult at times too. A powerful and moving exploration that draws the young reader into each stage of the journey, inviting the chance to imagine the decisions he or she would make. From the winner of the V&A Student Illustration Award 2016 A powerful and necessary picture book – the journey of a child forced to become a refugee when war destroys everything she has ever known.

Imagine if, on an ordinary day, war came. Imagine it turned your town to rubble. Imagine going on a long and difficult journey – all alone. Imagine finding no welcome at the end of it. Then imagine a child who gives you something small but very, very precious. Stepping Stones tells the story of Rama and her family, who are forced to flee their once-peaceful village to escape the ravages of the civil war raging ever closer to their home. With only what they can carry on their backs, Rama and her mother, father, grandfather and brother, Sami, set out to walk to freedom in Europe. Nizar Ali Badr’s stunning stone images illustrate the story. The Journey by Francesca Sanna

With haunting echoes of the current refugee crisis this beautifully illustrated book explores the unimaginable decisions made as a family leave their home and everything they know to escape the turmoil and tragedy brought by war. This book will stay with you long after the last page is turned. Missing color story is about children who work in the street, their difficult reality and being marginalized in this world. It is also talking about their dreams that children have as a whole, and the reality is incomplete colors but dreams are colorful. Lubna and Pebble by Wendy Meddour

In an unforgettable story that subtly addresses the refugee crisis, a young girl must decide if friendship means giving up the one item that gives her comfort during a time of utter uncertainty.

Lubna's best friend is a pebble. Pebble always listens to her stories. Pebble always smiles when she feels scared. But when a lost little boy arrives in the World of Tents, Lubna realizes that he needs Pebble even more than she does.

This emotionally stirring and stunningly illustrated picture book explores one girl's powerful act of friendship in the midst of an unknown situation. (This book includes both English and Turkish in the same book)

Tarık and his father have to leave their island after a dark cloud threatens the island. They sail away in order to find a new place to live during their journey. On their way they are helped by a white crow and a friendship is formed.

Jenny Molendyk Divleli is a Canadian living in Istanbul with her husband and their five children. She is a teacher and blogger who also tries to share ideas about how to educate children about Islam in a hands-on and engaging way. She is currently awaiting the publication of three children's books expected to be published this June.